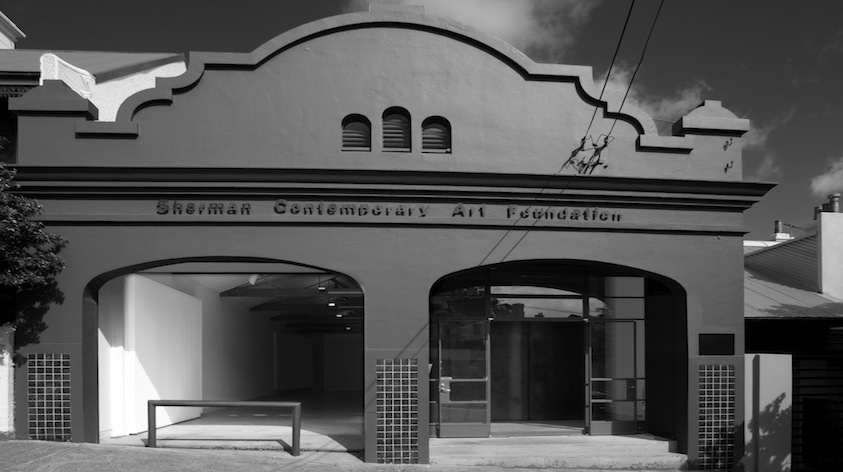 Sherman Contemporary Art Foundation (SCAF) – established in 2008 under the Artistic Directorship of Dr Gene Sherman AM – is a philanthropic enterprise dedicated to providing an innovative forum for contemporary art and presenting work by internationally renowned visual practitioners primarily from Australia, the Asia-Pacific region and the Middle East. The Foundation was built on Sherman Galleries’ 21 years of commercial exhibitions and artist representation (1986–2007), a glimpse of which is provided in Twenty: Sherman Galleries (1986–2006).

SCAF’s installations and exhibitions energise and respond to the gallery’s five-part complex, which comprises:

Extensive projects are developed through partnerships with public art institutions at a regional, state, national and international level; for example,

Concurrent or travelling exhibitions, co-publications, discrete projects and off-site events feature – and are constantly in planning. Entry to all SCAF projects is free, as is participation in all public programmes (SCAF occasionally charges for materials relating to workshops).

SCAF is recognised as a pioneer in the Australian cultural landscape. As a privately funded, public exhibition space with a focus on the axis of the Asia-Pacific region and the Middle East, SCAF is staffed by highly qualified art professionals and directed by an academically trained proprietor with almost three decades of gallery management experience, outreach into the business, political and film worlds as well as engagement with the broader community.  The Foundation’s longstanding singular geographic focus and rigorous standards distinguish it from other similarly conceived institutions.

Summary
Dr Gene Sherman AM is a leading Australian cultural figure and philanthropist. She is Founder, Executive and Artistic Director of the Sherman Centre for Culture and Ideas (SCCI), established in 2017 as a cultural-exchange platform focusing on contemporary fashion and architecture. For 21 years (1986–2007) Dr Sherman was Director and Proprietor of Sherman Galleries, a commercial gallery with a focus on artists from Australia, the Asia Pacific and the Middle East. From 2008- 2017, Dr Sherman was Chair and Executive Director of the Sherman Contemporary Art Foundation, presenting 37 projects by significant visual practitioners across art, architecture, fashion, film and design from the Asia Pacific, Australia and the Middle East. She is Adjunct Professor, UNSW Art & Design, a Member of the Tate Asia-Pacific Acquisitions Committee (since 2009) and currently co-Chair (since 2015), a Member of the Tate International Council (since 2017), and a Board Member of The Australian Institute of Art History (since 2009). Dr Sherman regularly lectures on Australian and Asian contemporary art, Australian and Asian private foundations, gallery management, the art of collecting, and architecture and fashion. She was made a Member of the Order of Australia in 2010 in recognition of her cultural philanthropy and support of emerging and established artists. The French Government has honoured Dr Sherman with two prestigious awards in its Legion of Honour awards system: the Officier de l’Ordre des Arts et des Lettres (2016), and the Chevalier de l’Ordre des Arts et des Lettres (2003).

Career
Born and raised in South Africa, in 1976 Dr Sherman moved to Australia with her husband, Brian Sherman (co-founder of pioneering fund management group, EquitiLink). She taught at the University of Sydney from 1976 – 1980 and awarded her doctorate in early 20th century French literature from the University of Sydney in 1981. She later became Head of Languages at Ascham School (1981 – 1986).

Established in 2018, Dr Sherman’s newest venture, the Sherman Centre for Culture and Ideas (SCCI), aims to forge a new path that elevates fashion and architecture to a more prominent place alongside other mediums of cultural expression, by providing a vibrant platform for the exchange of challenging ideas within the broader framework of culture.

SCCI will feature two concentrated programmes each year, over the five-year period 2018-2022: SCCI Fashion Hub, in April/May, and SCCI Architecture Hub, in September/October. Partnerships have been developed with major Australian and international cultural entities including Google Arts and Culture, Sydney’s Museum of Applied Arts and Sciences (MAAS), the Australian Film, Television and Radio School (AFTRS), the University of Technology, Sydney (UTS) and the Barangaroo Delivery Authority (BDA).

Dr Sherman is married, with two children and six grandchildren. She lives in Sydney, Australia.